Captain Abibaal – The Phoenician Sailor in the Throne of Darius Saga

Not all of the action in the Throne of Darius series takes place on land. There are naval battles and numerous escapes and escapades at sea. The key character in most of those is an officer in the Persian imperial navy: Captain Abibaal.

Abibaal is a Phoenician sailor. The Phoenician cities of the Levant were part of the Persian empire. Each had its own fleet, which was made available whenever the empire sent out the call. The Persian imperial navy also relied upon the sea-faring Phoenicians to crew and officer a third of their own ships (Egyptians and Ionian Greeks manned the other two-thirds). Unable to match the Persian fleet, Alexander sought to drive it from the sea by taking its naval bases, notably Miletus and Halicarnassus, both of which are besieged in the first book. The Phoenician cities were his next targets. When he conquered those cities he made it a condition of their surrender that their navies would serve him. Many Phoenicians serving aboard imperial ships deserted rather than fight against their brethren. 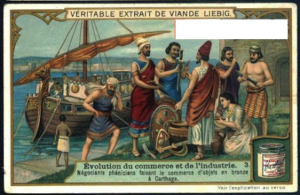 Captain Abibaal was not one of them; he remained loyal to the empire – as did the sailors of the Phoenician city of Tyre, who remained steadfast to the end in the fight against Alexander the Great.

While it would have been grand to give Abibaal command of one of the great battleships of the fleet, such as a massive quadrireme or even larger quinquereme, or one of the fast, sleek deadly triremes (of the type that won the day for Athens at Salamis), it somehow only seemed fitting to set him upon the deck of a smaller vessel.

That ship is a speedy little trikonter – a smart scout ship manned by 30 rowers (from which the name of this type of ship is derived) and a handful of sailors who trim the ship’s single sail and perform all of the other duties to keep the vessel afloat and shipshape. This type of ship could carry a small complement of marines or passengers and up to 50 tons of cargo. Although it could be of limited use in a battle, it was far better suited to carrying messages, scouting the enemy – or for performing special, secret missions – such as those which occur in both books in the Throne of Darius series.

The trikonter is one of the oldest types of ships – many of the vessels in the Illiad are trikonters.