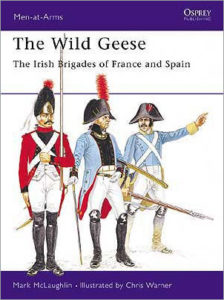 The Irish Brigades of France and Spain

In the early years of the English Civil War, a French traveller in England remarked that the Irish ‘are better soldiers abroad than at home’. Between 1585 and 1818, over half a million Irish were lured from their homeland by promises of glory, money and honour in a constant emigration romantically styled ‘The Flight of the Wild Geese’. Throughout this period, the Irish brigades in France and Spain participated in conflicts ranging from the wars of the Spanish and Austrian Succession to the Napoleonic Wars. Spanning over two centuries of history, this book examines the uniforms and organization of the Wild Geese in France and Spain.