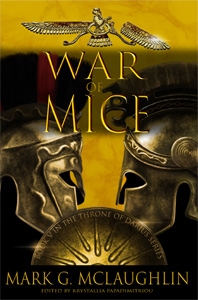 Book V of the Throne of Darius Series: War of Mice

ALEXANDER OF MACEDON would have tied the author of this series of historical novels by the ankles to a chariot and then driven around the city three times, dragging his broken body as he went. Why? Because Mark G. McLaughlin has the audacity to tell the story of the young conqueror’s wars not as tales of honor and glory, but for what they truly were: brutal, murderous, merciless even monstrous marches that enslaved entire peoples and destroyed great civilizations – and doomed the world to hundreds of years of internecine warfare. Here is the account the victor and his apologists do not want told, the too-long buried view from the other side of the Macedonian phalanx: the story of the men – and women – who stood against a tyrant in defense of their homes, their families, and their very souls.

WAR OF MICE is the fifth book in the THRONE OF DARIUS series. In this volume, as Alexander prepares for his coronation as Pharaoh and enshrinement as the SON OF ZEUS-AMMON, Mark G. McLaughlin takes us back to Sparta, where its king prepares to challenge the Macedonian hegemony. Rather than call back her son from his march east to conquer Persia, Alexander’s manipulative mother, Queen Olympias, calls upon the near-legendary septuagenarian warlord Antipatros to meet this unexpected domestic challenge. While Spartans and Macedonians prepare for an epic clash that will decide the fate of Greece, to Alexander, who dreams of world conquest, their struggle is nothing more than “a war of mice.”