Alexander of Macedon (often call “the Great”)  was involved in one way or another with more than dozen women, each of whom played a key role in shaping his personality and his destiny.   None of these, however, had as much of an impact on Alexander as did his mother, Olympias.   Although vilified by almost every historian (and apparently with good cause), she was devoted to him and he to her.   When one of his generals, Antipater, wrote him a scathing letter of her misdeeds,  the historian Plutarch says that Alexander not only refused to chastise her, but also pardoned her, as “a single tear from a mother wiped out ten thousand letters.”

Olympias was a Molossian princess born in 375 BC to King Neoptolemus I of Epirus.   After her father’s death, her cousin took the throne, and it was he who offered her in marriage to Philip of Macedon in 357 BC.  Olympias was no meek little princess, however.  She claimed to be a descendant of the family of the Homeric hero Achilles, was a devout priestess of Dionysus, and was an infamous snake handler.  Philip reportedly once came to her bed only to flee, as dozens of snakes were there, writhing about her naked form.

When she gave birth to Alexander, Olympias declared that Zeus, not Philip, was the father.  She claimed that the king of the gods had come to her as a thunderbolt, and that Alexander was his child – and thus a demigod.  When she and Philip became estranged, Alexander took her side and went into exile with her.  The king and his son later reconciled, but their relationship was never the same again.

Upon Philip’s assassination Olympias mobilized the generals and nobles to support her son’s claim to the throne.  She was by repute “a jealous and resentful woman,” as Plutarch put it, as well as arrogant, meddlesome and headstrong.”   When Alexander died, for example, she tried to take power in Macedon.  When her first attempt failed she retired to her native Epirus, raised an army and marched back to Macedon, where the army hailed her as queen.  Antipater’s son, Cassander, however, would have none of that; he counterattacked, forced her to surrender and condemned her to death without a tria in 316 BC.

PS:  Olympias was not her real name.  She was born Myrtale (Myrtle), but was given her nickname by Philip after he won a horse race at the Olympic Games.

(Coin and golden image found in the royal tomb at Amphipolis) 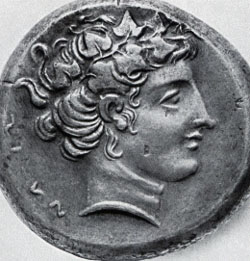