Alexander of Macedon had four sisters.  One was a famous warrior queen and another an adored princess bride.  A third also wore a crown and was so beloved that her widower founded and named a city in her honor – a city that still stands today.  The fourth never got the chance, for like her sisters she, too, was murdered by an assassin’s blade.

My two previous posts (see the links below) told the stories of the elder pair of Alexander’s sisters; this one tells those of the younger pair, Thessalonike and Europa.

Europa’s tale is by far the shortest and the saddest.  She was the daughter of Alexander’s father, King Philip, and his last wife, Cleopatra Euridike. Europa and had the misfortune of being born just shortly before Philip was assassinated in 336 BC.   She and her mother were murdered shortly thereafter, allegedly on the orders of Alexander’s viciously jealous mother, Olympias.

Thessalonike, on the other hand, was raised by Olympias as if she were her own.  Thessalonike was the product of yet another of Philip’s many wives, Nicesipolis of Pherae.  While Olympias was as usual jealous of the new queen, she rather conveniently (for Olympias) died from complications related to childbirth.  Olympias quickly swooped in and declared she would care for baby Thessalonike and treat her as one of the family.  Born in 345 BC, the little princess was only nine when her father was assassinated, and as she was under Olympias’ control was seen as a useful pawn, rather than a threat to Olympias or her son, Alexander. 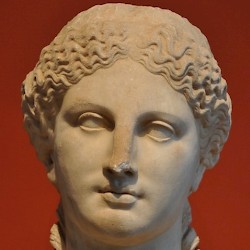 (The inscription reads: “To Queen Thessalonike, daughter of Philip” and is on display at the Archaeological Museum in Thessaloniki)

Very little is known of Thessalonike’s first 30 years other than that she was always a member of Olympias’ household, and remained as such long past her half-brother Alexander’s death in Babylon in 323 BC.  In the tumultuous years that followed, many of Alexander’s generals fought amongst each other for the spoils – as did his mother, who made her own bid for power in Macedon, sparking a civil war.

That war came to an end when Cassander captured Olympias (and Thessalonike) when he stormed her fortress at Pydna in 316 BC.  A general in his own right, Cassander was the son of Antipater, the man to whom Alexander had entrusted Macedon and Greece while the king campaigned in the east.   Cassander had ambitions of his own and believed that marriage to the late king’s sister would strengthen and legitimize his reign as king of Macedon.  He took Thessalonike as his bride, and together they had three boys.

Cassander allegedly fell in love with her, so much so that he founded a city in her name:  Thessaloniki.  Unfortunately, however, she did not live happily ever after.   Cassander died young, as did their eldest child, Philip.  The other two boys, Alexander and Antipater, then fought each other to see who would succeed as king of Macedon.  When Thessalonike backed Alexander in 296 BC, an enraged and jealous Antipater killed his mother.

Although Thessalonike did not have the best of lives, the city that bears her name lives on. The thriving port city on the Aegean coast of Greece, moreover, is the nation’s second-largest city – and is thus the “queen” city of Greece.