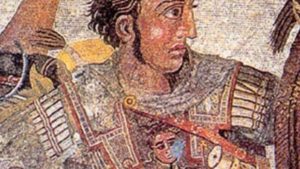 Some readers may ask why Alexander the Great is the villain and not the hero of my series, Throne of Darius.  The answer is simple: he was just that, especially to those whose cities and nations and empires – and lives – he destroyed.

Alexander of Macedon was a great general – but was far less than “great” in almost every other aspect.  A brutal conqueror, he brought death and destruction  to scores of peoples from Greece to India.  He overthrew the largest and one of the most benign empires ever created – and left its broken remains “to the strongest,” thus dooming the lands of that once great empire to centuries of internecine war.   Alexander, to his credit, did establish colonies and cities – each of which, however, he named after himself.  The greatest of those cities, Alexandria, did become the jewel in the crown of Egypt and, later, Rome – but with little thanks to the young Macedonian warlord.

As the noted historian Prof. Victor Davis Hanson remarked in his “The Wars of the Ancient Greeks,” although he should be acknowledged for his “sheer military genius,” Alexander was not a creator but a destroyer or worlds.  As Prof. Hansen so succinctly put it: “Alexander’s megalomania and desire for divine honors helped to pervert the legacy of Hellenism and left hundreds of thousands of Asians dead and displaced in his murderous wake.

While his character and exploits have been and continue to be lionized and romanticized in Western literature, history books, film and television, to those areas which felt his iron-shod boot, he was the devil incarnate.

For more on this “other” side of the coin I suggest this article by Prof. Ali Ansari of St. Andrews University, which appeared in the BBC News magazine:  https://www.bbc.com/news/magazine-18803290 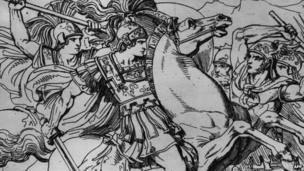