Memnon of Rhodes was a general in the service of Persia.  He was also Alexander the Great’s nemesis; someone he looked up to and liked as a lad, but whom he was driven – and driven obsessively – to defeat.  When Alexander invaded Persia in 334 BC, Memnon had warned the Perisan satraps (governors) to avoid battle and instead wage a war of hit-and-run and scorched earth.  As it was their earth that would be scorched, the wealthy nobles refused – and were defeated at the battle of the Granicus River that same year. (For  more on that battle, see chapters 21-26 of my novel: Throne of Darius: A Captain of Thebes.) 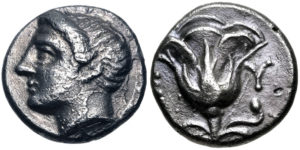 A Rhodian coin bearing the image of Memnon

Memnon had led a force of 500 Ionian-Greek cavalry in that battle.  As Alexander celebrated victory, Memnon rode to Sardis, Ephesus and Miletus in an effort to rally those cities to stand against the Macedonians.  Sardis surrendered rather than fight, and Ephesus fell from the inside due to squabbling factions.  Miletus, however, stood firm – and Memnon gathered forces to strengthen its defense.  The port city held out for several months  but Alexander eventually breached its walls.  When he did, Memnon escaped to an even larger port city down the coast – Halicarnasus.  That siege lasted considerably longer and cost Alexander thousands of men – and time – to take.  (Those two sieges are covered in detail in the novel).

After Halicarnasus, Memnon led the Persian fleet and a force of Greek mercenary infantry to attack and conquer many of the big islands off the coast of Anatolia:  Chios, Lesbos, and Mytilene among them.  His plan was to join with the Spartan King Agis II to lead Greece in a revolt against Macedonian rule and thus force Alexander to turn back home to save his own kingdom – rather than continue trying to conquer Persia.   Memnon, however, had been wounded several times in the numerous sieges, and those wounds never fully healed.  He succumbed to a fever late in 334 BC – about the same time that Alexander won the battle of Issus.  (These events are at the core of the second novel I am in the process of writing for my series:  Throne of Darius: A Princess of Persia.) 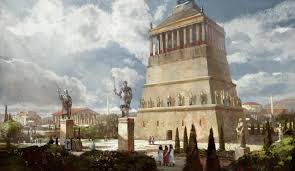 The Mausoleum of Halicarnassus, one of the  seven wonders of the ancient world

Memnon and Alexander first met when the Rhodian was in exile at the court of  Philip II of Macedon.  He had been banished from Persia for joining a rebellion against the Persian emperor Artaxerxes III.  Memnon had had little choice in the matter, as the uprising was very much a family affair.  His older brother, Mentor, was married to the daughter of the powerful satrap (governor) who sought the crown.  That the satrap was also married to their sister only solidified their bonds.  The rebels, however, were defeated and the family sought refuge in Macedon in 353 BC – about three years after Alexander was born.

Over the next decade, as Alexander grew up, he frequently came to Memnon with questions about the Persian empire, its customs, its lands and its military system.  In the meantime, Memnon’s elder brother had been recalled and offered a chance at redemption if he put down an uprising in Egypt.  He did, and the family returned to their home in Hellespontine Phrygia (northwestern Anatolia).   After Mentor’s death, Memnon took his place as overall military commander in the region.  He also married his brother’s widow, the legendary beautiful Barsine – the princess of the title in my upcoming Throne of Darius: A Princess of Persia.