As today is Super Bowl Sunday in the United States, it seems only fitting to note that football is not a modern invention – in either the American or broader international form.   The ancient Greeks played a game that fans of Football, Rugby and Soccer would find both achingly familiar and even a little unsettling: Sphaira.

People all over the world and in almost every culture have been playing something like football/soccer/rugby ever since somebody invented something round that could be kicked about, pounced on or thrown.  The ancient Greeks, for example, and the Macedonians of Alexander the Great’s army in particular, took kicking and tossing a ball about to the next level – and a particularly violent one at that.   Ancient chroniclers note how many Greek cities used this contest, which they named Sphaira.  (from which the English word “sphere” is derived) as a form of martial training, much like modern armies do with variations upon the them of  “Combat Football.”

(Note: this is not to be confused with the sport of Sphairamachia – in which two boxers wearing padded round gloves pound each other with their fists. This was a kinder, gentler form of the Pankration,  – a marriage of the words pan for strength and  kratos for all – a no-holds-bared kicking, biting, choking, punching, gouging and wrestling bout that would make even the most vicious mix-martial-arts fighter wince. )

The rules of Sphaira – also sometimes referred to as Episkyros,  which were vague and subject to change, were not unlike modern rugby – but more violent.  Teams of as few as two players and as many as a fourteen (as were common in Sparta during festivals) could kick or throw the ball to cross the opposing goal line.  The playing field had a white goal line at either end and a line across the mid-point (today’s 50-year line in American football).    The game rewarded team play, allowed players to use their hands and included the kind of pushing, shoving and clawing found in a particularly brutal rugby scrum.

Sphaira was played by people at all levels of society, including the royal pages who attended Alexander on his campaigns. 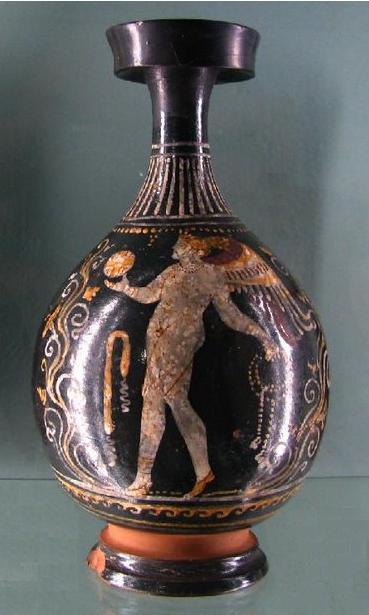