Demosthenes: Enemy of Alexander unto Death 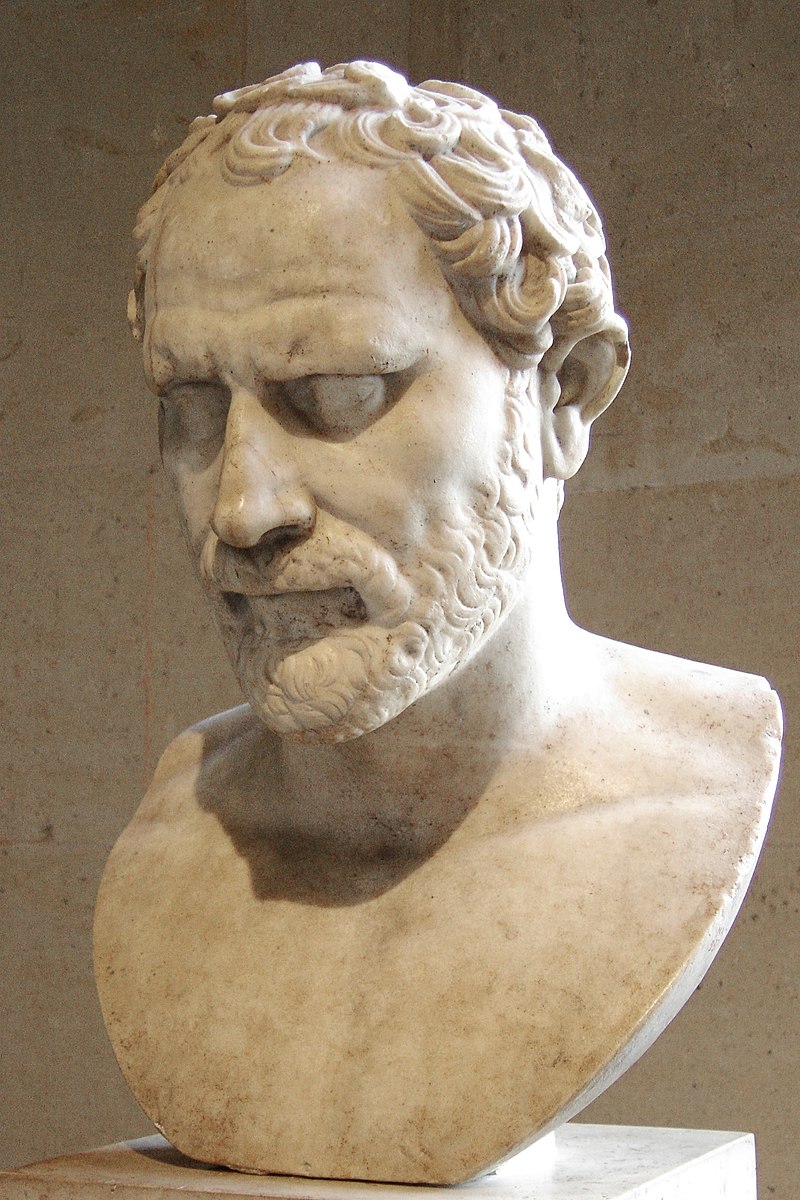 ..and that is quite literally was etched in bronze at the base of a statue raised to honor his courage by his fellow Athenians.  It read:

“If your strength had matched your wits, Demosthenes/

Greece would never have fallen to a Macedonian warlord.”

In his youth Demosthenes studied rhetoric and became a professional speech writer, orator and politician.  Although an orphan, he was  raised by guardians and upon becoming an adult was able to reclaim sufficient property to be admitted to the rank of citizen.  (Athens had 400,000 inhabitants, including slaves and foreign workers, but only 20,000 citizens).  He performed his military service as a trierarch, co-funding the trireme Dawn.   Athens at the time was at war with Macedon – as its king, Philip, had attacked and captured a pair of key Athenian cities, Amphiopolis and Pydna in 357 BC..

When Philip of Macedon raised his standard and invaded Greece, Demosthenes rallied Athens against him.  He also put his life on the line – fighting in the ranks as a hoplite at the battle   Chaeronea  338 BC.  Even after that defeat,  Demosthenes continued – and at great risk – to speak out against the “Hegemon” as Philip styled himself (hence, the word hegemony).  When the king was assassinated, it was Demosthenes who gave thanks – and the funeral oration – in Athens.

The death of Philip, however, did not put an end to Demosthenes’ efforts to break the chains of Macedonian oppression.  He helped convince, organize and fund the uprising by the Thebans in 335 BC against Philip’s son and heir, Alexander.   The victorious young king at first demanded Demosthenes‘ head, but settled for a bribe and the exile of some of the Athenian’s key supporters.

Demosthenes, however, remained active in the struggle against Alexander.  He back Sparta’s King Agis in a Greek rebellion that was defeated by Alexander’s general, Antipater, at Megalopolis in 331 BC, and was a key figure in the Thessalian War (aka Lamian War) that erupted when news of Alexander’s death in 323 BC reached Greece.  The Greek army was successful at first, defeating Antipater outside Lamia  (the first defeat suffered by a Macedonian field army anywhere in three decades).  Antipater, however, was later reinforced by Craterus (another of Alexander’s generals), defeated the Greek armies and marched on Athens in 322 BC – intent on capturing and killing Demosthenes.

The lifelong opponent of Macedonian tyranny and spokesman for Greek freedom, however, did not wait to be taken prisoner and executed.   He took his own life in a final act of defiance.  Like so many Greeks, he died fighting Alexander.