“Captain Kirk” as Alexander the Great (with “Batman” as Cleander)

Alexander the Great has been the subject of many movies:  some good, some bad, some awful and at least one so delightfully wrong and so bad that it …well…I won’t say “good” – but “guilty pleasure?” 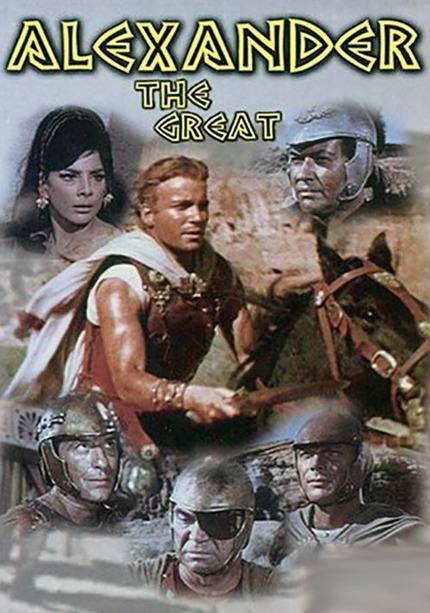 This was made before William Shatner (center, as Alexander) became Captain Kirk on Star Trek or Adam West (lower right, as Cleander) became the titular hero of the Batman TV series.  It was a made-for-television pilot for a series that (mercifully or sadly, depending on your point of view) was never picked up.   Like Time Tunnel, which was also on the air at that time,  the producers used clips from old movies and especially foreign movies to fill in the big epic battle scenes.  That is one of the key reasons why this show, like Time Tunnel,  dressed their actors in costumes that did not necessarily reflect their era, but which did mesh relatively seamlessly with the borrowed clips.

The cast also included the veteran actor Joseph Cotton  (The Third Man, Citizen Kane), who brought real gravitas to his part (as Antigonus)  but as Cotton was not going to be available for a series (spoiler alert) they kill him off.  (The real Antigonus survived Alexander and became one of the Successors who carved up his empire).

John Cassavettes, (lower left of the poster) who was a rising star (The Dirty Dozen, Rosemary’s Baby) and later a respected film director, is also on board as the traitor “Karonas” – an amalgamation  of a number of historical characters.

Alexander the Great as a Drinking Game (or Snacking Game)

This film is less than one hour long, and can be seen on a number of platforms (including You Tube:

In addition to making you smile on so many levels, you can make a drinking game (or snacking game) out of it with your friends every time you see something they get wrong.  Be warned that if you play it as a drinking game just take sips, not shots, or you will have one heck of a hangover in the morning.

Here’s one of the ‘wrong’ things to get you started:

–Princess Ada:  The lovely Ziva Roddan (top left) plays Alexander’s girlfriend, Princess Ada.  She wears skin tight pants, a belly-baring outfit likely borrowed from I Dream of Jeannie, a popular series of the era.   Shatner kisses her in what will become true Captain Kirk fashion, and she of course does a belly dance and writhes on the floor during his drinking party.

–Queen Ada:   Ada was a queen, not a mere princess.  She was not a sexy, young go-go-dancer, but was not only old enough to be Alexander’s mother – but actually adopted him!  Ada was the daughter of the king of Caria, an area of what is now southwestern Turkey, and was the rightful heir to the throne in Halicarnassus, a city which Alexander besieged for many months (as depicted in my novel: