Alexander the Great’s Women (V) His OTHER “Mother” – Queen Ada, “The Lady of Caria”

Few students of Alexander the Great realize that he had two mothers. The first of course was his birth-mother Olympias (whom I wrote about to start off this series back on May 26 …http://www.markgmclaughlin.com/uncategorized/alexanders-women-part-i-olympias-queen-and-mother/)

The second and far less well known was Ada, Queen of Caria, who adopted him during the siege of Halicarnassus. (That siege, that queen and that incident are well-documented in my novel, Throne of Darius).

Ada reportedly was genuinely smitten with the golden-haired boy king – but was also a canny politician.  By adopting Alexander she both tied herself to his rising star – and was better able to convince him to place her back on the throne from which she had been so rudely ejected by her little brother.  When Alexander’s armies entered Caria (on the southern coast of modern Turkey) she sent emissaries to him to offer her support.  Although she had been exiled to the fortified mountain plantation of Alinda, Ada had been allowed to maintain a small, personal guard.  She was also beloved by the people of Caria – a love made even greater by the harsh rule of her little brother, Pixodarus, and the even nastier satrap, Orontobates, who took charge when the lad rather suddenly (and suspiciously) died.      (Orontobates, by the way, is a character in both Throne of Darius and the next book in the series, Princess of Persia, which we expect to publish in July). 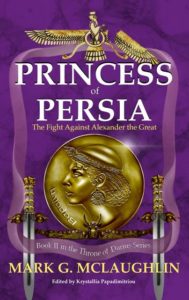 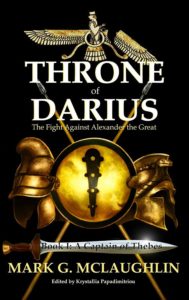 Ada was not just beloved, but was also the rightful queen – the legitimate heir and anointed ruler of Caria.  She was the daughter of King Hecatomnus and sister of his successor, King Mausolus (yes, THAT Mausolus, for whom was built the famed wonder of the world the Mausoleum of Halicarnassus ).

She became queen when she married her elder brother, Idrieus.  When he died in 344 BC, she became the sole ruler of Caria.  Unfortunately, four years later her little brother s Pixodarus staged a coup and stole her crown.  He exiled her from the capital  – the famed harbor fortress of Halicarnassus.  He died but six years later (334 BC).  King Darius refused her petition to have her title restored, and instead took the opportunity to incorporate what had been an allied client kingdom into a full province (satrapy) of the Persian empire.  He made his friend, the scheming, sycophantic, greedy (those were his good qualities) Orontobates governor (satrap).

Orontobates did not rule in Halicarnassus for long.  The same year he took power Alexander the Great invaded the Persian empire.  The Macedonian king’s victorious march brought him to the very gates of the fabled and vital port city, to which he laid siege.  It was a long and bloody affair. Even after he breached its walls the two coastal citadels held out for another year.  Alexander left a covering force to take care of those citadels and went on to conquer the rest of Anatolia.  Before he departed, however, he gave his adopted mother a gift:  the throne of Caria.

The two never saw each other again, but Ada did her best to help protect Alexander’s lines of communication and held Caria as his ally right up to her death in 326 BC  (when she was 54 years old).   Her remains are on display in the Archaeological Museum of Bodrum (the modern name for Halicarnassus), where she is still referred to as “The Lady of Caria.” 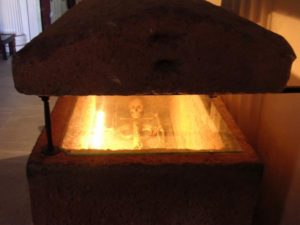