From Mark McLaughlin, the designer of The Napoleonic Wars and Fred Schachter, the team that brought you Wellington, Kutuzov and Rebel Raiders on the High Seas….

No stacks of armies, no hexes, no overly-lengthy rules to learn – Hitler’s Reich takes five minutes to set up and two hours (or less!) to play.  Players fight over Europe, across North Africa, the Atlantic and Mediterranean, and into Russia using a simple dice-enhanced conflict card comparison combat mechanism.  Or, as one BGG poster better put it, “a simultaneous revelation of cards similar to Twilight Struggle’s Headline Phase, but with a choice of what Conflict Card to play” - all with dice added in.  High-quality wooden pieces mark their progress, which is aided economically, politically and on the battlefield through the competition for and play of Event Cards drawn from three unique decks: one for the Axis, one for the Allies, and one from which either side can attempt to draw.

Hitler’s Reich is the first of the Card Conquest System game series in which players recreate epic military contests of history in short, comparatively simple and easy to learn, but hard to master games.  Designed to be set up in minutes and played to conclusion in one sitting, these are not simulations but games, albeit ones packed with enough historical flavor, excitement, and decision making to give you the feeling of being there at the highest levels of command.

In Hitler’s Reich, one side is the Axis of Nazi Germany, Fascist Italy, and their East European minions.  The other is the Allies of the United States, Great Britain and the Commonwealth, along with the Soviet Union.  It is April of 1941 and Hitler, already master of Europe and much of the Mediterranean, is poised to launch his great march East – Operation Barbarossa: the invasion of Soviet Russia.

Unfortunately for his ambitions, his Italian partner is in trouble, so he is faced with pressure to divert forces to drive into the Balkans and commit more resources to the Western Desert.  For that matter, why invade Russia?  Perhaps the defeat of Britain via a naval/U-Boat campaign including the conquest of North Africa and The Middle East, leading to an invasion of Great Britain itself is a better course to victory?  These are the kind of strategic choices the Axis faces.

As the Allied high command, will you succeed in throwing back this onslaught and eventually liberate Europe via a Soviet counter-offensive and Operation Overlord’s amphibious invasion of France? Or as the Axis leadership, will you triumph over all and create the thousand-year empire that would have been Hitler’s Reich.

Note: Although Hitler’s Reich is designed for two players, a three- and four-player variant is included for multi-player and team play as well as an intriguing solitaire game.

Additional Note on the game title from Mark McLaughlin:

Why “Hitler’s Reich” As A Title? Why Axis Soldiers On The Cover?

-A Conscious Choice — a reminder, a warning, a caution, and a challenge

I am not the first game designer, author, or film maker to use the name of the devil incarnate in a title…

I hate Hitler and his Nazis with an all-consuming passion. My family fought to stop him and his Japanese allies (One uncle was at Omaha Beach, another at Saipan, and my dad was in Burma with the Marauders as was one of Fred’s Uncles [quite a coincidence, that]). Fred’s other Uncles fought in the skies over Europe and on the ground from North Africa until the bloody end in Germany itself. Fred’s family also lost a number of European loved ones to the Shoa (The Holocaust).

That said, I choose the title intentionally. Hitler’s Reich was real – and a real threat, and one which if not defeated could have spelled the end of humanity. The title is a reminder of that threat, and a challenge to save the world from it; that is one of the key reasons why the solo bot is an Axis bot.

For the Allied player, this is a crusade…a challenge to save the world from evil. For the Axis, it is also challenge, but also a puzzle to be pieced together, to show exactly how much of a threat the Nazis presented. And it is up to you, Axis player, to show that – to show us what could have happened had they not been stopped – and to remind us of what the Allies were up against, and what might have happened had good men failed and evil men triumphed.

As for the cover, I consulted with Rodger on the artwork. It shows the very real danger and threat these enemies of humanity presented. That is also is why Rommel is there, as a reminder of how even a good man can be corrupted by the devil incarnate…seduced to the dark side, if you will.

So, that is the double challenge. As the Allies, save the world; as the Axis, show us what the greatest generation was up against – and what could have happened had they not been up to the challenge. 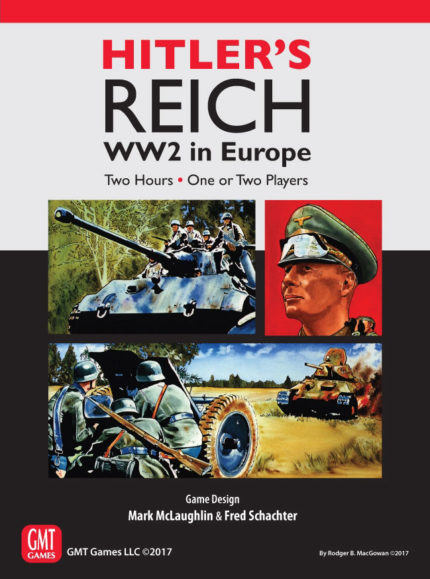