It is spring 1812. The armies of Napoleonic France are masters of continental Europe. However, there is a festering sore in Spain where despite seemingly overwhelming odds valiant Spanish soldiers and guerrillas with their British allies persevere in fierce defiance of Napoleon’s plans and armies. Even as their emperor prepares his epic invasion of Russia, Napoleon’s marshals gather forces for a final campaign. One man stands between them and the conquest of the Spanish Peninsula: an English general called Sir Arthur Wellesley, better known to history as the Duke of Wellington.

In adapting his multi-award-winning The Napoleonic Wars game system, Mark G. McLaughlin creates a furiously paced, card-driven, and battle/siege-intensive strategic/operational game of Wellington’s campaign to drive the French from Spain and invade France itself. Wellington is a game easily played to conclusion by two, three, or four players in an evening or an afternoon.

Unlike GMT Game’s The Napoleonic Wars, Wellington has simpler diplomacy rules and no naval units. Players are faced with a traditional blood and guts wargame with more cards in their hands and hence even more game action.

Players represent the British, Spanish, and French armies of the North and South. they fight their foes and compete to gain glory in the conquest or liberation of Iberia. When armies collide, battle or siege-related cards may be played and then dice rolled to resolve conflict, inflict casualties, and possibly gain loot. Some cards confer special advantages such as interceptions from two Dutchies distant, raise or eliminate pieces, or affect the course of the broader world-wide war with consequent impact onteh Spanish theatre.

With so many variables, no game comes close to playing the same way twice. Wellington is glorious, entertaining, unpredictable, and most of all enjoyable. It stretches players’ skills, hence the challenge and pleasure of a well-crafted card-driven game (CDG). 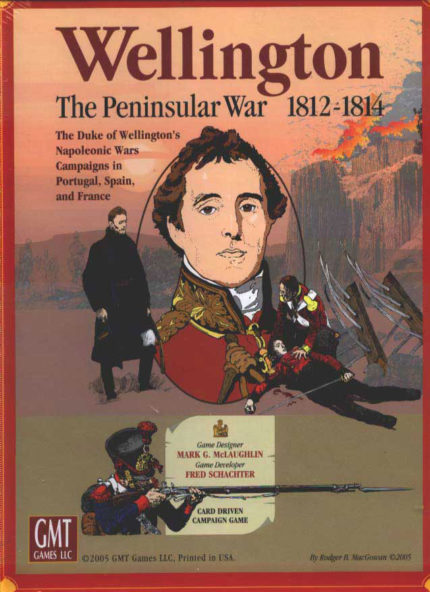