No Trumpets, No Drums is a game of the war in Vietnam. Two players or teams representing the Communist states and guerrilla armies of Southeast Asia and the pro-Western and neutral states and forces of that region and their American allies combat each other in a political and military duel for control over Indochina.

The players maneuver divisions, brigades, regiments and guerrilla bands and their supporting air, naval and artillery units in conventional and insurgent war situations. Combat is often continuous and always bloody, but the core of the game is not merely military success but the political goals that lie beyond such success.

Both players make military and political decisions to shape their war strategies, competing against each other for martial dominance of the countryside and for the hearts and minds of the population. Careful planning and astute generalship can often be the keys to victory, but even at the moment of triumph the unexpected string of ambushes, a coup in a neutral state or an unfavorable election can reverse the tide.

Although the game can last as long as 63 bimonthly turns, in practice the campaign is usually decided between the 1968 and 1972 V.S. elections (turns 23 and 47) . The pressure is heaviest on the Allied player as he must build up a strong political base so as not to be undercut by V.S. and international politics, but the Communist player cannot afford to sit back and wait for the Americans to go home. If he does, the Communist player may find the pressure reversed as the Allies rocket to victory in the sudden- victory rules.

No Trumpets, No Drums has 6 scenarios and a campaign game. The Tet Offensive and Year of the Rat scenarios are purely military scenarios that introduce players to the combat and movement systems. These and the 1975 scenario are intended as introductions to play, and should only take an hour or two to play. The remaining scenarios are longer. The campaign game offers players the chance to refight the Vietnam War, including the decision whether or not to commit large American ground forces to Southeast Asia, or to “Vietnamize” the conflict. 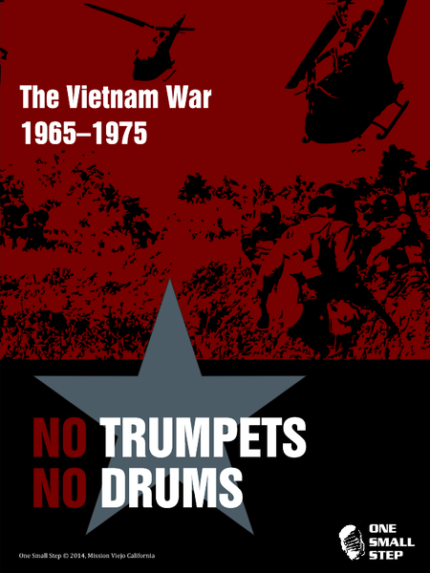