The Rise – and Final Fall – of Thebes

As I wrote yesterday,  as a military power and as a social and cultural force, Thebes had its high moments – and its low points.  (Home-town boy Herakles marrying the king’s daughter then killing her and their kids, and Sophocles setting Oedipus in the city being definite lows, as was the defeats at Platea and Chaeronea).    The final and lowest of all of those low points, however, came in 335 BC – only three years after the debacle at Chaeronea and the city’s occupation by Macedonian forces.   Emboldened by rumors of Alexander’s death, the citizens of Thebes rose up, drove their Macedonian occupiers back into the citadel and regained their freedom.

Alexander, however, was not dead.  Upon learning of the uprising, he disengaged his army from Thrace and marched south at a furious pace.  A small Theban force blocking the road to the city by Lake Copais was driven back, and the Macedonians took up siege positions around the city.  A routine skirmish at the outer defense works escalated into a full-scale assault, during which the victorious Macedonian soldiers hurriedly stormed and then broke into the city proper.   Alexander encouraged his men to sack and slaughter, and then ordered the survivors sold into slavery, and had the city razed to the ground.

As the Roman historian Livius reports, over 6,000 people were killed and a further 30,000 enslaved.   Of the hundreds of buildings, Alexander spared only the house of the late Theban poet, Pindar, who had once written a poem in praise of one of the king’s ancestors.  Even the many temples and the citadel (the Cadmea, where the Macedonian garrison had so staunchly held out until relieved), was torn down (see below) .

All of these events and more are described in my novel, Throne of Darius,  during which Alexander first meets the story’s protagonist, Dimitrios, the Captain of Thebes in the subtitle. 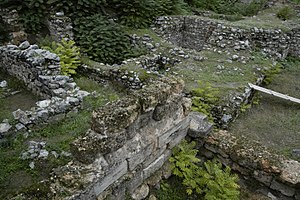