“..and then Alexander struck”…Turning Point at the Battle of Granicos 334BC 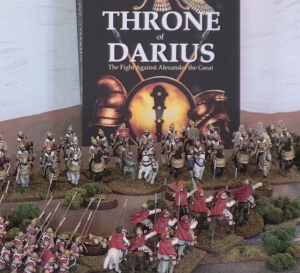 “Down the bank and into the river the Cilician and Paphlagonian cavalry streamed. Their blood up, they were crying shouts of victory and calling out their own names, the better so that their opponents and the gods above would know to whom the glory should accrue. And then Alexander struck.”

The turning point of the battle of the Granicos in 334 BC, (From p. 162 of Throne of Darius Book I: A Captain of Thebes).

When Macedonians with 16 foot-long pikes fought hoplites with 8 foot-long spears the victory did not always go to the boys with the bigger…toys. On flat battlefields, of course, that extra eight feet of wood triumphed, but not all battles are fought on parade grounds. On at least two occasions Alexander the Great’s much-vaunted phalanxes came out on the “short end” when fighting hoplite spearmen.


One such occasion was the battle at the Granicus River, in May 334 BC. Alexander’s phalanxes struggled to slog their way out of a shallow, slippery, stream and up a muddy embankment against Persian cavalry, who hurled javelins and shot arrows at the vulnerable foot soldiers. The pikemen eventually scrambled and formed up on firm ground, but only after Alexander himself broke the line of the enemy horse with his own cavalry. When the Persian cavalry fled, they abandoned 8,000 Greek mercenary hoplites stranded on a hill (among whom stood Dimitrios, the Captain of Thebes in the title of the first book in my series).

Alexander ordered an all-out assault. The Macedonian infantry formation was 16 men deep – two to four times as deep as the hoplite line, a line which had to be even more thinned out to cover the ground as the Macedonians overlapped it. The Macedonians valiantly went up the hill, but the rough ground disordered their formation. The hoplites (who also preferred flat ground) with their shorter spears were more agile and were able to get in between and under the long pikes and throw them back.

After the failure of the much-vaunted pikes, Alexander’s generals sent their light troops and cavalry to the flank and rear of the hill to surround the Greeks. They wore the hoplites down with javelins, slings, and arrows – and then the Macedonians came at them from all sides. Three out of every four hoplites fell – yet still, they did not break.

As dusk came, the old Macedonian general, Parmenion, finally intervened to stop the battle and give the hoplites a chance to surrender.