“Ishkandar Guzastag“ – “Alexander the Accursed” and the persecution of the Magi

Alexander of Macedon’s plan to conquer and Hellenize the Persian empire went far beyond winning battles, sacking cities, and founding colonial outposts. While he left much of the imperial bureaucracy intact, Alexander did single out one key element of Persian society for annihilation: the priestly class.

One of the primary tenets of the Persian empire was its toleration of different cultures and religions. Its founding emperor, Cyrus, was known as “the Great” not merely for his conquests but also for his humanity. While he adopted and supported the Zoroastrian faith as the primary religion of the empire, Cyrus also decreed that no subject should be forbidden to or persecuted for practicing their own faith. Some religions, notably that of the Hebrews whom he freed from the Babylonian Captivity, benefitted from imperial largesse. The Second Temple in Jerusalem, for example, was begun with funds  gifted by Cyrus. Even in Egypt, where the priests repeatedly fomented rebellion, the status of the clergy and their holy places and books was sacrosanct under Persian law.  Darius the Great, for example, showed his respect for the Magi by engraving their name in stone on his funeral monument at Beshtun. The famous Greek general and historian, Xenophon, similarly showed his respect for the Zoroastrian holy men, whom he depicted as men of both faith and learning, and noted that they were charged with the education of the imperial household.

Although the Hellenistic world of Alexander was a polytheistic one – and one where Alexander believed himself to be the son of its principal deity, Zeus Ammon – the young conqueror loathed, detested (and perhaps even feared) the Zoroastrian faith. He viewed it and its priestly caste – known as Magi – or wise ones, as a challenge to his godhead, to his rule, and to his (for lack of a better word) “crusade” to Hellenize the world.  Thus were their holy books destroyed -notably in the great fire at Persepolis- their holy sites ransacked, and their holy men hunted. This campaign of persecution sparked and fueled numerous rebellions, and earned Alexander the epithet “Iskandar Guzastag”:  ancient Persian for “Alexander the Accursed.” 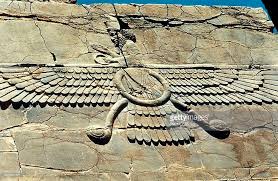 Alexander’s persecution of the Magi sputtered out soon after his death, as his Successors had enough difficulties in governing their lands and fighting each other without further antagonizing their subjects. They and later Greeks came to admire the Magi for their proficiency as astronomers – but also associated them with astrology and similar arcane arts. Roman authors, notably Pliny, feared them as practitioners of the “dark arts” (i.e. “magic,” which itself is derived from their name).

Zoroastrianism was occasionally persecuted by the Christian church, but found its most dangerous and lethal opponent in Islam, which all but eradicated the faith and its followers.  Only about 120,000 people still practice the ancient faith, mostly in Hindu parts of India, where their ancestors fled to escape Muslim persecution.