Why a “Captain of Thebes” as part of the title?

Throne of Darius: A Captain of Thebes is titled such because the principal protagonist of the story, Dimitrios, is indeed a captain of a company of soldiers from Thebes.   This is the first book in a series that will follow this captain, his brother Klemes (a physician) and their friend Ari (a young soldier in the captain’s company) as they take part in the fight against Alexander the Great.

The novel begins with the revolt of the Thebans against the army of occupation that Alexander’s father, King Philip of Macedon, installed in the city after their victory over the combined armies of Greece at the  battle of Chaeronea (338 BC).  Emboldened by Philip’s death and stirred to action by rumors that Alexander had been killed fighting the Thracian tribes, the city revolted and drove the Macedonian garrison back into the Cadmea – the key citadel inside Thebes.   Athens, then led by the great orator and democrat, Demosthenes, promised support for Thebes and any other city that would rise up to free Greece from Macedonian domination.

Unfortunately, rumors of Alexander’s death were premature (he had been merely wounded – seriously, but not mortally).  Alexander raced south with his army.   At a farm near the shores of Lake Copais on the road to the city the Macedonian advanced guard was met by a small force of citizen-soldiers, among them a company led by Dimitrios, a captain of Thebes. 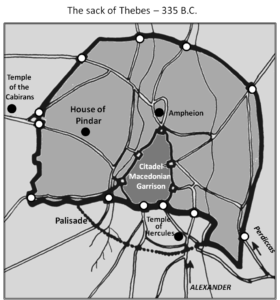