As some of you may know, I not only write about ancient history but also design board games and paint miniature soldiers from that (and many other) eras.   Friday night we fought out the epic battle of Kadesh from 1275 BC. About 50 chariots and over 600 other miniatures, all in 15mm, all painted by me.

This map shows the battlefield, and the Egyptian Divisions, strung out in a long line of march, with Pharaoh Ramses II with the lead division, Amun.

As that division was making camp, the Hittite King Muwatali sprung his ambush – thousands of chariots charged across the fords of the Orontes River to shatter Re Division.

The Hittites, coming across the river from the right, slam into the marching column of Re Division…Muwattalli (my friend, Kelly) in the background eating that traditional Hittite battle ration – pizza…….the fortified city of Kadesh is on the hill at the top of the table 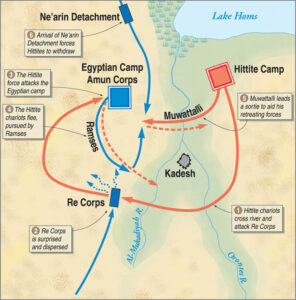 ….and the Hittite second wave, under Jon’s command, comes across to put the final nail in Re’s coffin… 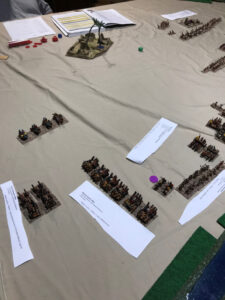 As the Hittite Lords of the Bridle turned to attack Amun, a second wave came across to block Ptah Division from racing to Ramses’ rescue. Pharoah was given a bit of a breather as the Hittite chariots got tangled up finishing off Re,

Muwatalli kept his infantry in and behind Kadesh…in our game, Muwatalli was given the option to bring forth his infantry – which Kelly (as Muwatalli) did and did eagerly.

(The view below is from behind the victorious Lords of the Bridle, just after they shattered the Re Division)

Pharaoh (me, in the gray shirt) looking worried as the Hittite divisions converge upon his lone Amun Division

-Here is turn four of the battle, where Ramses has been able to form up Amun Division (camp behind them) while Muwatalli hurls Storm, Blaze, and Fury Divisions against him (Muwatalli himself is in the single chariot in the center of the table, with the yellow trim). Lead elements of the victorious Lords of the Bridle Hittite heavy chariots under Prince Hattusilli are racing forward, having punched through the Re Division…the Egyptian Nearrin Division has just crossed the river behind Pharoah’s camp and is hurrying to his rescue 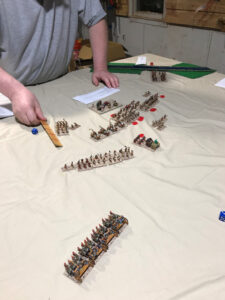 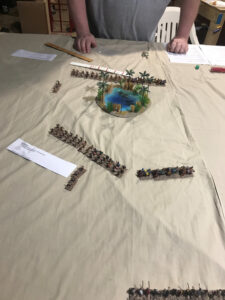 -Hittite Ugarit and Allies Division of heavy chariots (bottom) engage light chariots of Ptah Division, who are seeking to buy time for Set Division to run up the back and save Pharaoh 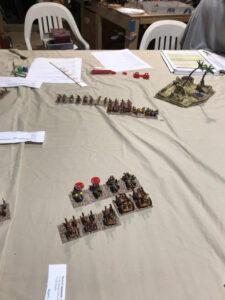 -Egyptian Ptah Division covered Set’s rapid march. Here they are seen finishing off the last of the Hittite’s Gasgan and Anatolian Allied Infantry who spent themselves in a death or glory charge (from the bottom of the picture)….which turned out to be more of the former than the later

-Egyptian Ptah Division then turned north and is finishing off the Hittite’s Syrio-Canaanite Allied Division of light chariots, (note the column of Egyptian spearmen coming on fast to close the deal…

– Hittite Lords of the Bridle heavy chariot division, their wheels still slick with the blood of Re Division, crossing the plain heading to finish off Ramses…just as Set Division (on the top left) is coming to the rescue of Pharaoh (you can see the Egyptian Guard Heavy Infantry Swords on the top right)

The Hittite infantry was spent from several turns of fighting (marked by way too many bad dice rolls) by the time the Nearrin (or N’rrin) Division rode in from the NorthWest corner to save the day.

We called it here…Hittites had inflicted heavy losses on the Egyptians, but had taken so many in doing so that their army was close to its breaking point (and would most likely have broken on their next turn or the turn after that)…..Egyptian Nearrin and Set Divisions had come up just in the nick of time…

A pyrrhic victory for Pharaoh…..(not unlike the actual battle, where the Hittite chariots had to withdraw when the Nearrin showed up, and Ramses encamped on the field – thus claiming ‘victory’….although he then marched away, leaving Kadesh (the whole point of the war) to the Hittites

yet Ramses signed a peace treaty (the first recorded treaty in history – and which is on display at the UN) leaving Kadesh to the Hittites. 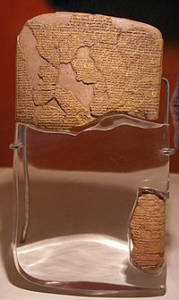