Alexander the Great: Descendant of Achilles (?)

Alexander the Great was obsessed with many things, but few of them more so than Homer’s Illiad.  Alexander read it when under the tutelage of Aristotle, took a copy of it with him on campaign and reputedly slept with it beside his camp bed and even under his pillow.  Why? Because he believed not only that the book was as much fact as fiction, but also because he believed himself to be a direct descendant of Achilles, whom he saw as the hero of the work.

That Homer portrays Achilles often as anything but heroic – petty, proud, punitive and, well, pissy – escaped Alexander entirely,  as it has the majority of those whose familiarity with  almost immortal (but but for a tiny spot on the heel) is based on second-hand or remembered opinions formed in their youth.  Alexander’s mother, Olympias, told him when bouncing the blonde boy on her knee, that the blood of Achilles ran in his veins.   Olympias and her family claimed to be descended from Molossus,   son of Pyrrhus and grandson of Achilles (or at least a grandson of one of the members of Achilles’ family).   From then on, he was hooked.

Alexander made no secret of this link – if anything, he played it up, big time.  Most notably when he crossed the Hellespont at Troy (while his army crossed elsewhere), made a sacrifice at what the locals told him was the grave of Achilles, and then stole what he was told was the helmet, shield, armor and sword of Achilles.   Alexander frequently dressed up in this rather musty, rusty old gear, which he later had made into a trophy stand for his command tent.   He even often referred to his best friend, comrade and (perhaps in their youth) lover, Hephaestion as Patrolcus, who played much the same role in the life of Achilles.  It is unlikely that Hephaestion was entirely comfortable with that analogy, seeing as how Patrolcus dies – and dies first – in the Illiad.

Alexander further propagated this link in his coinage, depicting himself in Achilles‘ armor on the obverse and a portrait of his mother, as Thetis (Achilles’ mother) on the reverse. 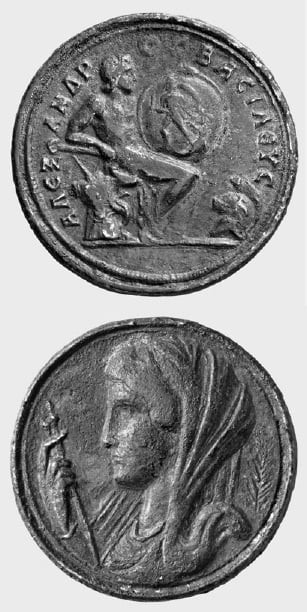